Have you ever done a craft show that you thought was going to be the greatest show and you may sell out of your items? Been there done that! More than once.  If you haven't read my Craft Show Nightmares, Part 1, you can read it HERE.
Now onto the story. This particular craft show was a little over an hour away from my house so that tells you I thought it would be great! I told my husband, daughter, mother in law and sister in law to come down and visit me at my awesome craft show! Once I got there I realized it was in a cafeteria like this... 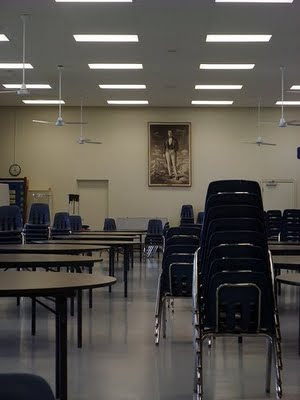 and it was for employees only to peruse on their lunch break!  Sorry I don't have a picture of my table, but I was a little discouraged at the time.  I was sitting there next to a man selling basketball jerseys and a guy selling candy bars.  Why do I not investigate these things before I do them?  Anyway, my family was still coming down so that made me happy.  At least I could chat with them while I was sitting there not selling a thing, right? No.  They were asked to leave as soon as they arrived due to being a security risk!  Mind you this company had nothing security-ish about it.  It was a utility company.  So my family, including my 1 year old daughter at the time were asked to leave.  At that time, I wanted to pack up and get out of there...but no, I had to stay until the end because no one was allowed to leave!  So not only was my day ruined but I felt mortified that my family had driven over an hour and got kicked out! I think this one tops the worst craft show ever.  Tell me I'm not alone...anyone?

kristina
I have two beautiful girls, Kaydence and Kensington and am married to my high school sweetheart. I love to create, homeschool, cook and take care of my family. I am a lover of essential oils and their amazing health benefits. You will find all of this here on my blog. Welcome!